CHEFS®EVOLUTION 2012: Stars Meet in the North 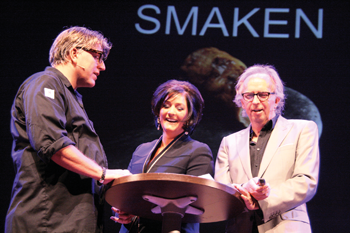 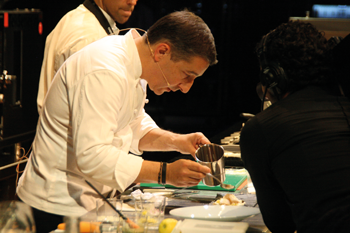 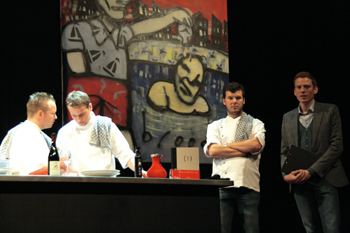 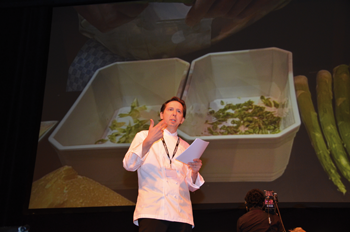 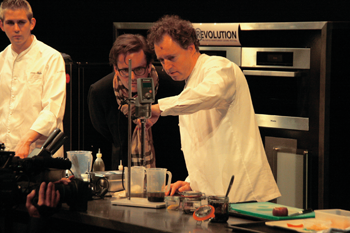 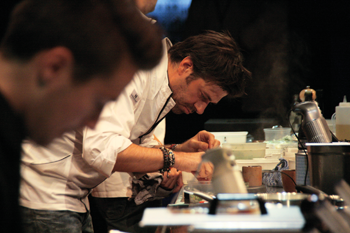 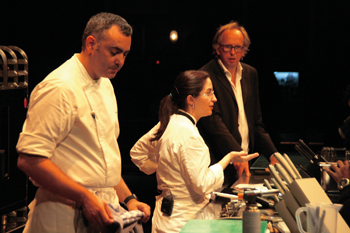 Zwolle, 8th June 2012 – The first CHEFS®EVOLUTION on the 2nd and 3rd June drew more than 800 delegates and around 100 specialist journalists into the De Spiegel theatre in the small, typically Dutch town of Zwolle. As part of the “Zwolle unlimited” event, the CHEFS®EVOLUTION showcased itself as a culinary hot spot for industry specialists and interested parties and delighted with a varied stage programme, star chefs close to the audience, exhibitors from the premium segment as well as the BOERenmarkt, a farmer’s market where Jonnie Boer’s product suppliers were showcased.

CHEFS®EVOLUTION moves with the times and demonstrates starting points for culinary ideas to continue in their evolution. The specialist symposium in 2012, which represents the international format of the successful CHEF-SACHE Germany, certainly testified to its international legitimacy in a thoroughly impressive manner. The organisers, Jonnie and Thérèse Boer and the Team Port Culinaire around Thomas and Carola Ruhl, give a positive verdict. “CHEFS®EVOLUTION was a total success. Visitors and exhibitors were extremely satisfied. This says a lot for an international format”, says Thomas Ruhl, publisher of the Edition Port Culinaire.

The first international edition of the CHEFS®EVOLUTION magazine appeared in Dutch and English on the occasion of the event and has been available from the press distribution sectors in Belgium and Holland since the 8th June 2012.

Hans Steenbergen (Editor-in-Chief of Food Inspiration Magazine) and Professor Dr. Ingo Scheuermann (Dr. Know of the Food Bloggers Scene) hosted the event at which international star chefs provided top level food entertainment and a culinary exchange on an equal footing. The creations presented were in line with the current trend demonstrating simplicity and straightforwardness but still guaranteed excitement and surprising effects. On the area next to the theatre, the industry specialists were able to discover and sample the regionally grown and produced products at the BOERenmarkt. “CHEFS®EVOLUTION provides an extraordinary spectrum and is exciting”, says Ingo Scheuermann: “I find the shoulder-to-shoulder stance between Benelux, the Netherlands and Germany excellent. We have seen ground-breaking dishes and there is a lot we can take away from this, particularly for the next up-and-coming generation. It was fantastic that three top German chefs were able to present here. It was an altogether successful event and I am looking forward to the next one.”

Entertaining and instructive, the CHEFS®EVOLUTION stage show started on the Sunday with the book presentation “Puurst”, from Thérèse and Jonnie Boers. This was followed by an appearance by Gert de Mangeleer (Hertog-Jan, 3 stars) full of Flemish Power with perfectly matched wines from Joachim Boudens. In the afternoon, Heinz Reitbauer (Steiereck, 2 stars, No. 11/50 Best) enticed the audience into the Austrian product world. His opinion on the event: “We were extremely delighted to have been invited and to have such wonderful hosts. The location of the event is also perfect and everything has been brilliantly organised. The mood is great and everybody is very friendly with one another. At the same time, there is a real spark flying about and we are still looking forward to more speakers and spending time here.” Then, with Thomas Bühner (La vie, 3 stars) it moved on into the most species-rich garden in Europe. “I find this event amazing. On the one hand, we’re practically neighbours and on the other, it’s superbly organised”, says Bühner. Owing to the current earthquake situation in his home town of Modena, the Italian Massimo Bottura (Osteria Francescana, 2 stars, No. 5/50 Best) understandably cancelled his appearance.

The second day of the CHEFS®EVOLUTION began with the two top Dutch chefs Jonnie Boer (De Librije, 3 stars, No. 33/50 Best) and Sergio Herman (Oud Sluis, 3 stars, No. 21/50 Best) in a two-man team. This was followed by Spanish Avantgarde and new German School who changed the honours in turn. Christian Bau (Victor’s Gourmet Restaurant Schloss Berg, 3 stars) and Sven Elverfeld (Aqua, 3 stars, No. 25/50 Best) proved with their performance that the new German School has a place in the international framework. After his appearance Elverfeld said : “It is important to be a part of CHEFS®EVOLUTION, this means that you can address a new audience and be recognised abroad. I think it is a very good thing that CHEF-SACHE is becoming international, because it brings a greater exchange with different colleagues in connection with wines, products or brands and it improves the European network greatly.” And Christian Bau is also enthusiastic about the event: “CHEFS®EVOLUTION is a great thing, it has been brilliantly and extremely professionally organised. It is a great honour to have been invited here and to be able to present beside such great chefs as Jonnie Boer, Elena Arzak and the Roca Brothers and to advance the German cuisine on an international scale.” The Spanish bundle of energy Elena Arzak (Arzak, 3 stars, No. 8/50 Best) was thrilled to have attended this international event and said: “It was a great honour to have been part of this and to share my ideas and to have been inspired by others.” At the end of the day, the Spaniard Joan Roca (El Celler de can Roca, 3 stars, No. 2/50 Best) also gave an impressive stage performance. He expressed his opinion of the event as follows: “I really like the format for events like these; the informal gathering with colleagues and acquaintances and the creative exchange in the congress.”